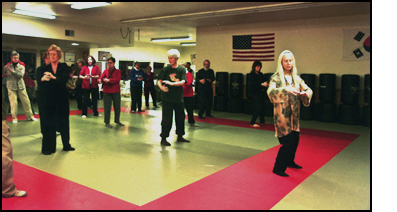 Margaret Emerson has been practicing T’ai Chi since 1979 and teaching since 1989. She has studied with many teachers, including the first 6 years with Kao Ching-hua in Illinois and 1 1/2 years with Chi Seong-in in South Korea. She originally learned the art as part of a successful healing program for a precancerous condition. Margaret is the author of A Potter’s Notes on T’ai Chi Ch’uan and Breathing Underwater: The Inner Life of T’ai Chi Ch’uan. She is a contributor to the book Martial Arts Teachers on Teaching, also to Qi Journal, Aikido Today, and Black Belt Magazine. Her video is “Wu T’ai Chi, Kao Style: As Practiced and Taught by Margaret Emerson.”
Margaret’s original teacher, Kao Ching-hua, learned Wu style T’ai Chi as a girl in pre- Revolutionary China. Kao used her practice when she was a teenager to recover from a heart condition. While earning her bachelor’s degree at National Central University of China, Kao taught T’ai Chi to female college students. Before coming to the U.S. in 1948 for graduate studies in phys ed, she was named the only honorary member of the previously all-male T’ai Chi Ch’uan Association of Shanghai.

All T’ai Chi styles are based on a martial art, but the Wu style’s emphasis shifted away from fighting toward mental and physical fitness and meditation. The Wu style is entirely circular, reflecting and enhancing the natural flow of blood and qi (internal energy) throughout the body. The practitioner learns to combine breathing and imagination with physical movement. This cultivates focus, sustained concentration, and calm. T’ai Chi represents the opposite of the “no pain, no gain” approach and is one form of exercise in which slower is better.

Wu Style Long Form has 104 movements (only about 40 different ones–most movements are repeated). Students learn the early part of the sequence in the beginning class, start from there and add on in the intermediate class, and finish the form in the advanced class.

Various related qigong and therapeutic exercises are also taught, and these are often accompanied by handouts. Some time will be given to explaining the origins and history of T’ai Chi.

Western clinical trials have documented these benefits of T’ai Chi:

Studies are underway to investigate its effectiveness against back pain. T’ai Chi is one of the evidence-based exercise programs of the Arthritis Foundation.